This post is part of the 📖 Nine Lies About Work series.

Today, I am still reading the LIE #1: People care which company they work for chapter of the brand new book Nine Lies About Work written by Authors Marcus Buckingham & Ashley Goodall.

There are some big lies, distortions, faulty assumptions, wrong thinking that we encounter every time we show up for work. Nine lies, to be exact. They cause dysfunction and frustration, ultimately resulting in workplaces that are a pale shadow of what they could be.

By reading Nine Lies About Work, you can get past the lies and discover what’s real. These freethinking leaders recognize the power and beauty of our uniqueness. They know that emergent patterns are more valuable than received wisdom and that evidence is more powerful than dogma.

Yesterday, I started reading the LIE #1: People care which company they work for chapter from Nine Lies About Work book.

LIE #1: People care which company they work for

Companies almost universally miss the importance of teams. Most companies don’t even know how many teams they have at any moment in time and who is on them, let alone which are the best ones—we are functionally blind to teams.

The team is the sun, the moon, and the stars of your experience at work.

Those team members who said they trusted their team leader were twelve times more likely to be fully engaged at work.

When you’re next looking to join a company, don’t bother asking if it has a great culture—no one can tell you that in any real way. Instead, ask what it does to build great teams.

That’s it for today. Tomorrow, we will read the second chapter LIE #2: The Best Plan Wins.

What lies we've learned so far? 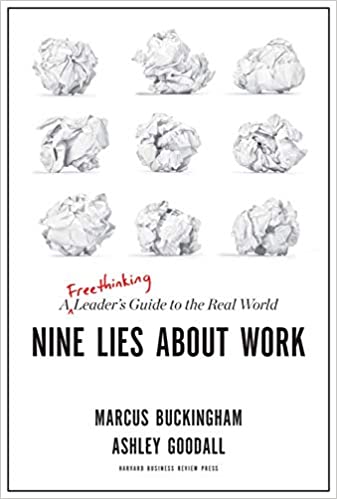 Nine Lies about Work: A Freethinking Leader's Guide to the Real World

Short Blurb: How do you get to what's real? Your organization's culture is the key to its success. Strategic … Read more
Buy from Amazon